A downloadable game for Windows, macOS, and Linux

Jellymancer is a small Roguelike where you play as a sentient Jelly, consuming anything that gets in your way.

It was a 7DRL, so was completed in under a week.

It also has more than 16 minutes of original music! Probably more music than you'll spend playing it!

There's been a bug fix release that fixes some of the big issues with the 7DRL (audio looping bug, pathfinding not working at all) - but is still not entirely bug free, and is actually a bit easier - due to pathfinding working as expected. You're welcome to check out the first attempt at bugfixing my jam code, or it in its original jammed unadulterated form. The OpenGL one was technically compiled after the seven days, but with (from memory) no code changes.

Alas, on my system (Win10 64-bit) the OpenGL version crashes upon starting a game (selecting that option from the menu). The 7DRL version works though.

Huh. Thanks for that - I'll have an investigate. Slightly concerning... can't drop back to one version just yet!

Does it happen consistently? I found one crash level bug on creating the game, but happens very occasionally - but on both versions.

It does, I've not been able to get the OpenGL version to run beyond the title screen. One issue might be, perhaps, that my laptop has two video cards? An integrated one for battery life and a discrete one for when more muscle is needed.

Nice game! This has some interesting mechanics to it. A few suggestions:

* Needs some kind of visual response when you lose health, since there's a distinction between your core and your jelly. Screen shake, flashing the screen red, or something like that would help.

* The first time I played, I appeared in a room in the upper right corner that had no exits. It looks like the level generator tried to create a corridor going south out of the room, because it had two columns of "#" characters leading away from it, but there was no space between them to move my jelly down.

* Cosmetically, it might be fun to let you choose the color of your jelly. And some squishing noises as you move might be satisfying, too.

Thank you! I agree entirely. I didn't even consider the idea of colour.

I wanted visual and audio response to both - but I didn't get time. I'm hoping to add it in to the 'enhanced' edition over the next couple of weeks. I also really wanted bloopy noises, but again - time.

I like the idea of a screen shake. I think I want to combine it with a bit of goo or something when your Jelly is attacked - as I don't think it's really clear enough yet.

Wish I knew what was up with the generator. I didn't roll my own for this one. I think I'll have a look into a workaround.

Thanks again for your feedback, and for playing! 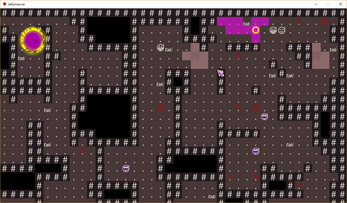 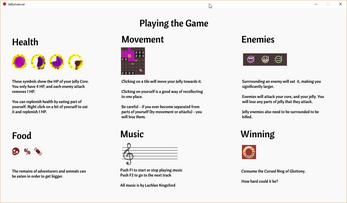 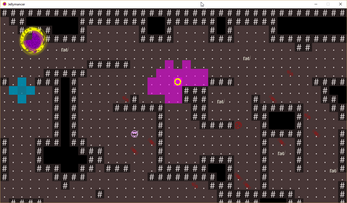